skip to main | skip to sidebar

Why is the power button for the iPod touch on the opposite side as
the. iPhones?? Is this worth an email to Steve?
Posted by Visish at 7:54 AM No comments:

Today, the unlock for nearly every baseband and bootloader was finally released, basically a slap in the face to Apple's patching of every exploit that the dev team and geohot have been finding. Thank heavens they did this all at once so we don't have to worry about what version we have and all that crap! Only problem is, I'm still worried about what's going on with my 3GS because its not really clear. So I'll have to play around with 4.0 update on my 2G Touch. Till tomorrow, then!
Posted by Visish at 9:21 PM No comments:

So I just bought a new white iPhone 3GS, running 3.1.3 stock already. After trying sn0wbreeze which worked easily on my 3.1.2 to upgrade and unlock, I was confused. I had also used sn0wbreeze to easily jailbreak 2 3G's in the past month. I just used Spirit, which is hands down the best jailbreak thus far. Even snappier than blackra1n (sorry, geohot). Can't wait to get OS 4.0 and jailbreak it. I wounder if any devs would just put up their ipsw?
Posted by Visish at 11:55 PM No comments: 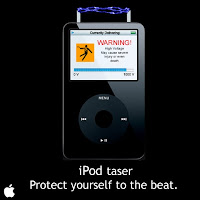 I made this for a Gizmodo competition a while back in high school, in order to win some gadget prize. And now, ironically, in a bit about the Gizmodo-Apple dispute over the new iPhone "HD/4g/whatever", Jon Stewart brings it up! Of course, mine was based off the most current iPod at the time, the iPod Video.
Posted by Visish at 3:37 PM No comments:

Google Voice on the iPhone

Given that everyone with (non-jailbroken) phones is still waiting for a Google Voice app for the iPhone, I thought I'd post how I have set up my integration even though I occasionally use the GV Mobile app. This is for people who don't want to fully switch to their Google Voice number. If that's what you're looking for, check this Lifehacker transition guide.
1) Go get Google Voice
2) Set up forwarding of incoming voicemails on your number to Google Voice
http://www.google.com/support/forum/p/voice/thread?tid=00a93855af6943b4&hl=en
3) Change what the voicemail button on you iPhone does.
http://www.haklabs.com/2007/iphone-voicemail-button-fix/
Enjoy!
Posted by Visish at 11:09 PM 1 comment:

"Fast and Famous" in Silicon Valley

Jay Leno recently tried to discover the inner racetrack around his home in Beverly Hills/LA; he subsequently filmed a movie similar to "Rendezvous" with a front-wheel view of the drive around the track (video). He sized it to be about the same as the famous Nurburgring, around 13 miles or so. Over the summer, driving to Stanford, I found a similarly thrilling route around I-280, which traces the hills around Silicon Valley. It stretches through Los Altos Hills and through the foothills of Palo Alto hills before heading into Portola Valley. On my drive to University Avenue yesterday, I came across an Aston Martin DB7 as well as a Ferrari 599 Maranello and tried to "race" them. That's when it came to me that this drive could indeed be the equivalent of Jay Leno's drive around Mulhulland Dr, through Canyon Valley, and back along Sunset Blvd. I decided to tweak it to give it a proper allowance of both hill driving and curves as well as a great straightaway for speed. The route is highlighted belwo. While Foothill Expressway is a little too much of a long straightaway, it is nonetheless exhilarating to speed down when you get a streak of green lights. Furthermore, it is very well paved and most traffic moves at 10 above the limit. It's a nice parallel to Sunset Blvd and gives a nice view of the hills along the way. Anyway, the 'ring starts on Magdelena Rd, right by the Rancho Shopping Center in Los Altos. Down this road and one signal light away is the onramp to I-280, which cuts around the hills and up to Page Mill Rd, which cuts back down the hill in a usually empty stretch that connects back to the backbone of the route, Foothill Expressway. This drive may not cut through the homes of Hollywood's stars, but nonetheless takes you by many VC offices that funded the big names in tech.
Posted by Visish at 1:41 PM No comments: